I still have yet to see one in the wild but check out the video taken by a volunteer at the Corkscrew Swamp Sanctuary in Naples, Fl.
Written on a whim by Jungle Pete at 8:13 PM

I blame my sister. I could blame myself for being bitten by a Crocodile but she should have known that I was in the Crocodile pit and doing a reptile demonstration when she called. I guess I should have turned the ringer off but with Crocodile in hand, Tiffany's ringtone began playing. 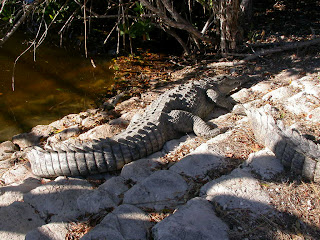 Embarrassed by the distraction I took one hand off the beast and while holding it by it's tail attempted to turn the ringer off. Crocodiles have an extra vertebrae in their neck and have more flexibility than alligators. Holding it by the tail was not a good idea and the agressive monster whipped around and chomped me on the hand leaving 2 tooth marks and a V-shaped cut from knuckle to knuckle.

Fortunately the croc that bit me was not one of the 11 footers pictured above and below. These two reside in Flamingo in the Everglades National Park. 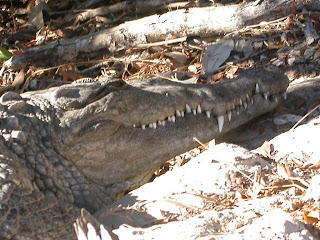 They have sharp teeth and one the most powerful bites of any animal in the world with well over 2000 lbs of pressure per square inch when they bite.
I was chomped by Mean Joe Green - a nearly 2 year old and 2 foot long American Crocodile. It has sharp teeth which broke the skin but not a powerful bite. Yet. I'll survive. 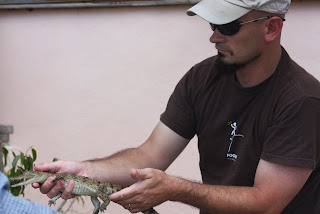 The bigger issue with gator and croc bites is infection. I cleaned it well and the wound will not even leave a scar. When handling reptiles of any sort. Turn your phone off and focus.
Written on a whim by Jungle Pete at 8:05 PM

"Let me warn you about Vultures" the woman on the phone at the animal rehab center said. "It's ok - I know where you're going with this. They're pukers."
While on tour on Friday we spotted a juvenile vulture sitting on the ground under a palm tree. Unusual. It hopped about and clearly could not fly. So after a quick call to C.R.O.W (Center for the Rehabilitation of Wildlife) out on Sanibel I confirmed that the Vulture had most likely fallen from the nest and was in need of rescue.
Vultures eat carrion. Dead stuff. On occasion the Black Vulture will help a sick or injured animal into the next world but fresh road kill is always the chef's choice for our roadside clean up crew. 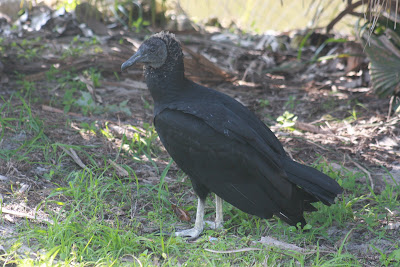 Vultures don't seem to have much in the way of a defense system considering their weak talons but it might be a toss up if I had to rescue an injured owl vs a vulture. Vultures puke. They vomit when stressed. They barf if you get too close. So the idea of rescuing an injured vulture requires considering this consequence.

I prepped myself by climbing into a stinky dumpster to get a cardboard box big enough to transport the bird to CROW, grabbed a towel from the Lake Trafford Marina and headed down the road to wrangle the bird.
I know it's a juvenile because it still has feathers on the head. Adults go bald which is a great benefit when you spend your days with it stuck in a dead animal carcass. 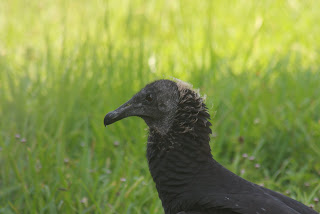 Upon approaching the bird - it hopped about and tried to get lift off. I followed it around the Marina sign. I followed it around a Sabal Palm. There was no way I was going to catch this bird. It was healthy. It just had no idea it could fly. So I made one mad dash towards the potential puker and it leaped skyward, landing 6 feet up on a chain link fence. I approached again and the bird hopped down and headed towards the canal - I followed and when the bird ran out of space and was cornered by me, my box and my barf-shield, it leaped again, soaring a few feet down into the canal. Just before splashing into the gator-filled water, it flapped with several heavy wing beats, soared skyward and landed on a branch where it looked back at me as if to say "I had no idea I could do that". The vulture could finally fly. Good luck my new vulture friend and may the cars and roads bring you good fortune.
Written on a whim by Jungle Pete at 11:30 PM

Granted my Saturn is black and absorbs heat like a sponge but I had to take a picture of the temperature as reported from inside the sweltering vehicle. Gulf breezes usually cool us off in Fort Myers but not today. Official temp hit 97 with a heat index of 106. 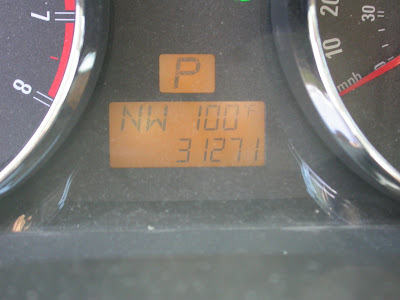 How to Kill a Pelican

Judging by the precautions the wealthy community of Anna Maria, Fl takes to protect their wildlife it wouldn't surprise me to see a poster on how to kill a pelican. I mean why not. They're just birds. They poop on the pier. They steal fish from people fishing. Who cares if a pelican dies?
Kenny and I were geocaching from Venice to Bradenton along the Gulf of Mexico today and found ourselves out on the pier at Anna Maria. The 600 foot long pier has a bar and a restaurant out on the end and there were well over 200 people on it this Saturday night including many people fishing. As we were walking off the pier an unmanned fishing pole snagged a pelican. Kenny grabbed the fishing pole - alerted the owner and demanded the guy understand the seriousness of the situation. "Oh that happens all the time" the guy explained. Now seriously annoyed - Kenny and I tried to make him understand that the hook had torn the Pelican's bill, the monofiliment was now tangled around the bird's wings and the treble hook had cut deeply in the bird's side. 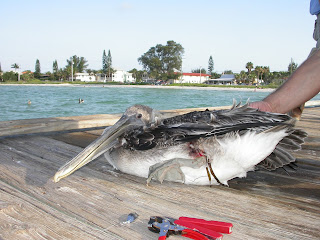 We were able to get the bird onto the pier. As I distracted the Pelican, Kenny covered the bird's head with a reusable Publix shopping bag and grabbed the bill. Pelican's can turn their head in every direction and if they hook you they can shred you. We untangled the fishing line but the hook remained lodged in it's side. 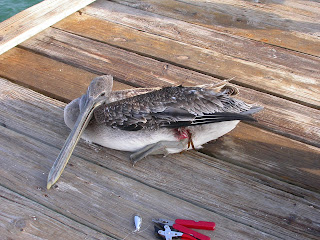 The fisherman who hooked him helped us restrain the bird and after 30 minutes the bird was stressed to the point where it seemed to pass out. We were able to cut the hook loose and eventually the bird roused itself (and posed for the picture).
Another woman called 911 and asked for their assistance only to be passed along to Fish & Wildlife in St. Lucie County. I asked a local bartender who also said it happens all the time. Cut the hook and let the bleeding, injured bird go. A poster on Brown Pelican Safety explained how not to be injured by a hooked bird and to call a number (which is no longer in service). I called 411 while restraining the bird with the other hand. They gave me the number for Fish & Wildlife in Polk County. Where is Polk County?!? 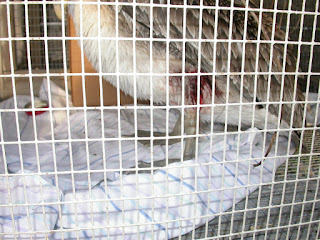 Eventually we called Save Our Shorebirds - a bird rescue operation 30 minutes south of the Anna Maria Pier. Coincidentally when we passed it earlier in the day I explained to Kenny that my dad used to help rescue Pelicans back in the 70's and 80's and some of the Pelicans came here. Who knew we'd rescue one later? 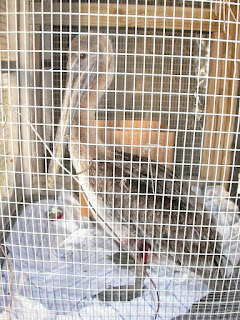 We placed "Billy Bob" in a large pelican-sized Rubbermaid file folder and I drove while Kenny kept the know angry Pelican from escaping in the back seat of the car. We brought him to S.O.S. and dropped him off in an overnight hotel cage (the pelican not Kenny). Volunteers from S.O.S. will look after the poor pelican as soon as they can and I'll update his progress.
It was a frustrating experience and the lack of help from people passing by was disheartening. Had we not been there the Pelican would have died. And even after we had assisted the bird, the lack of information on how to rescue the bird is unconscionable. The really stupid thing is I ran to the car to get the container and when I returned another guy (who had helped us capture the Pelican) had snagged a Laughing Gull by the legs. By the time we had brought that bird in and restrained it, his feet were so bound up that it was not long from losing circulation in the feet and possibly losing those feet.
I'm sure things like this happen all of the time and sadly fishermen probably just cut the line and the animals die. Thankfully there are organizations like S.O.S. (941-388-3010) in Sarasota County that help rescue and rehab injured wildlife.
In Lee County C.R.O.W. (239-472-3644) does similar work for many types of wildlife.
For those that would injure an animal or pass one with little care? I would send them to the Anna Maria City Jail. But that probably wouldn't make much difference. 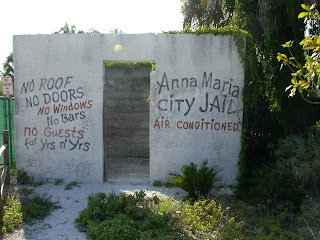 Land (for sale) of the Lost

There are 5 things we're looking for while we house hunt:
1) A few acres of property.
2) A house with a nice porch.
3) Drywall from anywhere other than China.
4) 3 bedrooms and a few baths so we can invite guests
5) A mid-sized, late Jurassic dinosaur statue - preferably a little bigger than a velociraptor and not so garish as a T-rex.
I think we might have found our new home. 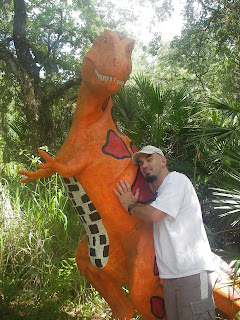 Look at following photo. What do you think? I have to say this made me seethe with anger. The U.S. Flag Code states - "The flag should never be displayed with the union down, except as a signal of dire distress in instances of extreme danger to life or property." 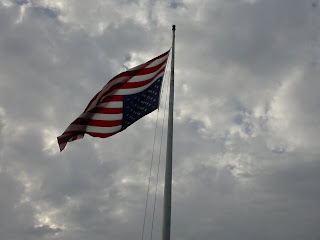 No distress here. Just a disrespectful display. This is a memorial garden - hardly the place to make a protest. 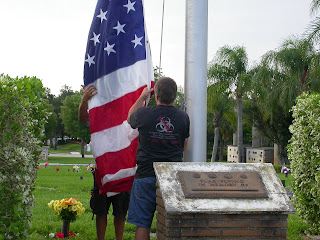 Something not right? Fix it. 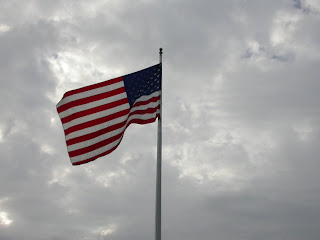 That looks much better. 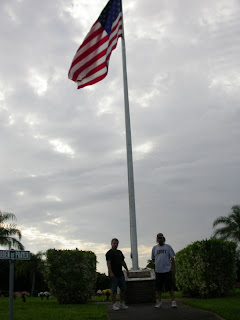 Nice job guys!
Written on a whim by Jungle Pete at 8:56 PM

I wash the Everglades van after every tour. So when I went to pick it up at Flamingo Gardens in Davie, Fl for the next day's tour I noticed brown streaks running down the sides. I cleaned it, went out on tour and returned the van after washing it.
The next morning I arrived at Flamingo Gardens just before dawn and found the same brown streaks. I also found the locals roosting on top of the van - becoming my number one suspect in the fouling of the sides of the van. 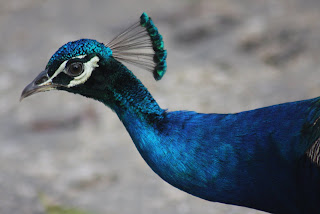 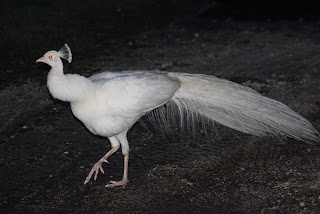 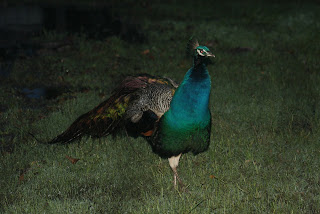 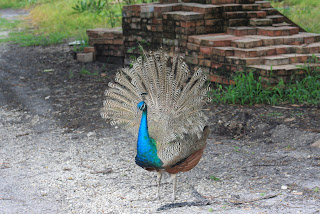 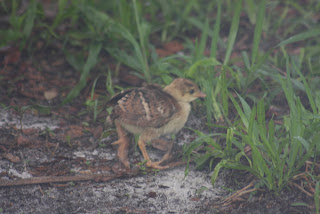 They're beautiful. So I'll forgive them. Especially this cute little Peacock chick.
Written on a whim by Jungle Pete at 10:25 PM