South of the Border–Monarch Watch Part I

When I was a kid our family made an annual summer migration from South Florida to Upstate New York and back again in the fall. It was an arduous trek that I liken to that of the Monarch Butterflies that are completing their southern migration as I type.
The circadian cue that prompted our northern departure was an overdose of vitamin D and the ability to roast ants with a magnifying glass at 9 pm in the evening. Too much sun. Time to head north. This was a huge relief for me and my siblings who grew up with no air conditioning. It was also an opportunity to avoid flea season which as I look back now was something that was probably unique to our home.
Our 1200 mile journey required many stops to rest and feed. Monarchs stop at nutrient-rich, nectar-loaded flowers before resuming their flight. We seemingly stopped at every Burger King and Arby’s along the Atlantic Coast. 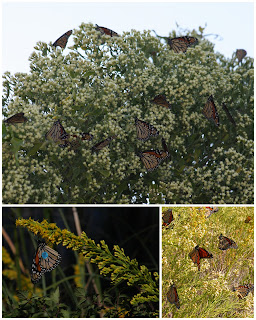 The return trip was no less exhausting and the ravenous fleas waiting back home made it all the more dreadful, but “South of the Border”, the tacky highway tourist trap between the Carolinas was a refuge, a sombrero-adorned landscape, illuminated like fireflies at night like with festive green and orange lights. To my parents it was a Venus flytrap. They knew they shouldn’t stop, but they couldn’t help it. It meant we were half way home and it made for a fun rest stop full of as much Mexican culture as Arby’s was full of nutrients.
For migrating butterflies there is no shortage of dangers. Windshields, predators and exhaustion surely claim thousands each migration. Not all of them intend to make it all the way south. Some lay eggs and it will be that generation that carries on the migration south.
At the St. Mark’s National Wildlife Refuge on Florida’s panhandle coastline, the last of the Monarchs are gorging themselves on sugar-rich nectar before casting themselves from the shore and heading across the Gulf towards Mexico. There they’ll ride out the winter before heading back north again.
As I take photos and watch the spectacle of Monarchs, Fritillaries and Buckeyes feeding on salt bush and goldenrods, I search for inner calm as hundreds of no-seeums, aka blood sucking midges, feast on me. I’m reminded of the fleas and as much as I’d love to stay, it’s time to go.
Written on a whim by Jungle Pete at 5:55 PM

After a long nature walk with a group of kids, a young boy asked me “How do you know so much?” and I replied “I don’t know that much, but I’m telling you what I know”. We could learn a million things a day and the world would still be full of amazing mysteries at the moment we draw our last breath.

When I personally discover something I have never seen before I presumptively claim it as a new discovery to science. I have never succeeded in any attempt to name a critter after myself.

We were exploring the Florida Caverns State Park recently and before descending into limestone darkness my wife spotted an insect that looked other worldly. Its chitinous exoskeleton was camouflaged to resemble lichens you’d find on a tree trunk and the body shape looked similar to a cockroach. As I photographed it, the 6-legged creature bowed its back and tilted its triangular shaped head towards me. It made eye contact, giving me the creeps. I feared for a moment that this bug might rear back, launch itself towards me and rip my face off, which it didn't.

I’ve never seen anything like this but it seemed oddly familiar…vaguely recognizable. I motioned to a park ranger who was prattling on about caves, sinkholes, caverns and other giant holes in the ground and asked if he knew what it was. He looked at it with disinterest and continued his subterranean sermon.

I sent the photo to fellow Audubon Guides writer Kent McFarland, who with curiosity, in turn passed the photo around until the strange beastly insect had a name. The Grizzled Mantis, aka Florida Bark Mantis (Gonatista grisea) is native to the southeastern United States. Like a Transformer it can tuck itself neatly into the form you see here or rear back with wings fanned out and front legs up in a defensive posture like other mantids.
So no – not a new discovery – but an absolutely fantastic find nonetheless. I’ll have to keep looking for Junglis Corradinii.
Written on a whim by Jungle Pete at 5:29 PM

Helping a turtle cross a road is easy. Placing a starfish stranded at low tide back in the ocean is simple. Removing a fishing line from the beak of a pelican is somewhat problematic. Helping a wild snake shed its skin? Sometimes it’s better to let them take care of their wardrobe changes.

I nearly stumbled upon a Gray Rat Snake (Elaphe obsoleta spiloides) at the lighthouse in the St. Mark’s National Wildlife Refuge in Florida’s panhandle. Seemingly unaware of my presence, the six-foot long, foggy-eyed snake was busy scraping its head and neck along the freshly painted foundation of the early 19th century structure. Gray Rat Snakes are a subspecies of the Eastern Rat Snake (Elaphe obsoleta).

Snakes shed several times per year depending on frequency of feedings, environmental conditions and age. This was a relatively large snake, although they can grow to seven feet in length. 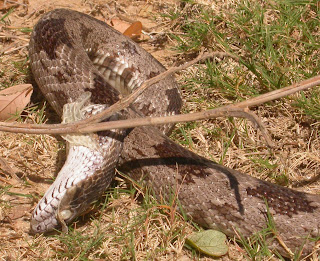 During shed, the skin cell that covers the eye pops up from the lower layer of skin giving it the foggy appearance and preventing the snake from seeing very well. Snakes tend to be more defensive during this period. Pick a snake up during shed and you very well could get bitten. Over the course of the next week or two, a milky fluid loosens the two layers of skin. Typically the outer skin peels off like a sock, starting from the head and ending with the tail.

The weather in the panhandle of Florida had been very dry over the last few weeks which may have led to this snake’s difficulty freeing itself from a dry and itchy situation.

Gaining little progress from scraping the wall, the snake slid across the grass, turned its head over and rubbed it on the sandy ground, eventually making its way to a rough, pebbly sidewalk that helped relieve the hang up.
As the snake slithered along the ground, the skin slowly rolled itself off, revealing a vibrant, colorful skin. No thanks to me.
Written on a whim by Jungle Pete at 8:43 AM

Watcher in the Woods - The Bobcat

When you’re in the woods do you ever get the feeling you’re being watched? Do you feel unseen eyes gazing upon you and following your every step? You feel nervous. Hairs stand up on end. You want to run. You need to get away!

I imagine that is how this Bobcat felt as I watched it cross a field, spring across the trail dart into the woods and crouch down, waiting for me to leave.

Bobcats (Lynx rufus) are shy, ubiquitous felines that range from southern Canada, throughout the United States and into Mexico. They tend to be smaller is Florida with males averaging 25 pounds and females 15 pounds. Relative to the three foot long tail of the Florida Panther, the six inch “bobbed” tail is distinctively shorter. Most Panther sightings, although still exciting are Bobcats. 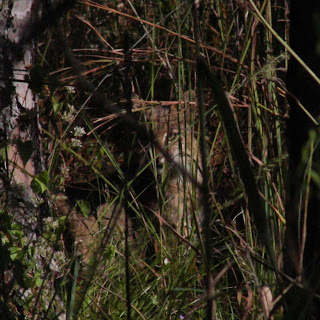 Here in Florida the Bobcat feeds on Raccoons, Opossums, Cotton Rats, Squirrels, Rabbits and other small prey items. I’m not on the menu and I’m at no more risk from the cat than the cat is of me.

As I stare between two pines and through the brush I can see the Bobcat starring back at me. The tan and black markings help conceal it. Its unflinching, stone-faced stare is mesmerizing. Hypnotizing. The longer I stare the more my mind begins to convince me the cat is not there. I know it is. But I blink and it’s gone.
Written on a whim by Jungle Pete at 11:40 AM