I am often asked if I worry about alligators. As a hiker and an tour guide I see them often. In fact we guarantee guests that they will see them on our tour. I never take for granted that we have massive reptilians that can grow more than fourteen feet in length. I understand them and I respect them. I do not worry about them.

Recently my wife and I took our baby for a stroll on a trail next to a marsh near our home. As she pushed the stroller through a muddy portion of the trail I noticed the stroller tracks bisecting an animal’s tracks. There was no mistaking it. A large all­igator had recently crawled from the river, climbed the muddy berm and descended into the pond on the other side. The large webbed feet made deep impressions in the mud and the sinuous trail of its heavy tail drew a perfect impression of an animal walking with a side to side gait. 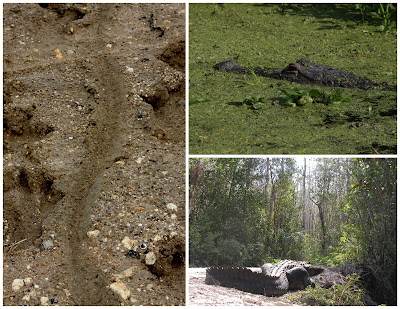 The alligator was nowhere in sight, nor was it lurking in wait to snatch our baby. It was a hot day and no doubt it simply wanted to get from one body of water to another. Fish, birds, turtles and other prey that are easily chomped and swallowed are typically on the menu. American Alligators (Alligator mississippiensis) often take to the water at the sight of a person and while attacks do happen, there have been only 568 reported in since 1948. Males were involved in 86% of attacks and unsurprisingly, many of those were provoked.

Feeding an alligator often results in an alligator losing its natural fear of people and they are more likely to approach. Swimming in rivers, canals and ponds, especially at night can mimic the sound of injured prey which draws the attention of an alligator. Water hazards on golf courses can be literal hazards as well.

Having said all of that, the number of fatalities caused by alligators since 1948 is twenty three. The number of babies in strollers chased by alligators? Zero. Am I careful? Yes. Am I worried? There are more important things to worry about.
Written on a whim by Jungle Pete at 8:17 PM

Willets are seemingly inconspicuous shorebirds that are easily ignored by the general beach going populace. Chances are if you’ve seen a wedding photo on the beach there is probably a Willet skirting the shoreline behind the bride and groom.

Willets (Tringa semipalmata) are often the bird that some kid on the beach is throwing shells at because the bird ignored the bread thrown at it. (Don’t do it kids, especially if my sister is around. She will throw shells back at you.) Willets have more class than to beg like gulls. Come on kids. They eat tube worms, aquatic insects, mollusks and fish.

To most people a Willet is just a drab-colored shorebird, but when it takes flight it has a striking and very obvious white and black color pattern on the underwing that makes identifying and enjoying a bit easier. The pattern isn’t just for our benefit, a flash of wing helps Willets indentify each other from other shorebird species. The preening Willet in the photo is showing a bit of the black and white in the lower right block.

Willets are monogamous during the breeding season. They split time between the Atlantic coast of South America and the east and west coasts of . While they grace our beaches, the males and females tend to nest in the vegetation near the shore. The nest is a well-hidden/conspicuous nest which is to say the nest itself is hidden among the reeds and grasses while a tunnel to the nest is more obvious.

Males help incubate the eggs and feed the young. Despite their mate fidelity, the females take off two weeks before the chicks fledge, leaving the last of the rearing to the male. I don’t know why this is, but with my own 6 month old at home, the thought of it makes me nervous.

Washed Away – The Sculpin

On Sunday, August 28th, the Weather Channel reported the last bands of rain and wind had passed through . Hurricane Irene was dubbed a meteorological flop. From the often storm battered coast of , I found it hard to believe that this storm had let so many off the hook.

I checked my facebook page to see how friends and family in were doing. Photo after photo, along with unbelievable videos of catastrophic flooding proved that A) forecasters and news outlets were quick to dismiss the consequences of heavy rain in a landlocked, mountainous state and B) is in fact part of the . They even have maps to prove it.

My friend Chris Saylor, the ranger at in uploaded some stunning photos and videos of the park as the rampaging Buffalo Brook stormed through it. Turbulent mud and boulders had ripped through roads and taken out bridges leaving behind an unfathomable landscape of debris and muck. In all of the destruction, one little curiosity caught Chris’ attention. Buffalo Brook is known for gold panners who occasionally find flakes and nuggets. Chris found something else bright and shiny. He sent me a photo and asked “what’s this?” In his hand was a now deceased Sculpin (Cottus sp.) that had been washed away from its stony brook hideaway into an open field.

is home to the Mottled Sculpin (Cottus bairdi) and the Slimy Sculpin (Cottus cognatus). Both thrive in the pebble and stone filled streams and creeks that were severely impacted by the hurricane. These slow-flowing, well-oxygenated waterways are breeding grounds for aquatic invertebrate larvae which sculpin feed on. Although the cryptic coloration of the sculpin aid them in blending in to their aquatic surroundings, they are preyed upon by trout who share the same habitat.

It’s hard to say how Hurricane Irene impacted the wildlife of ’s brooks, streams and rivers. It is clear how it has affected the Vermonters. Despite over 200 road closures, 30 bridge washouts and hundreds of houses destroyed across the state, the people of are picking up the pieces, digging themselves out and standing tall in the face of adversity. Their positive spirit can not be washed away.

To help Vermonters in need please visit the Vermont Food Bank and offer what you can.

Photos provided by Chris Saylor.
Written on a whim by Jungle Pete at 5:00 AM

One Hundred Steps – The Centipede

Centipede loosely translates to one hundred steps per second, which is the speed at which A) a person moves away from such a creature and B) the speed at which the creature can move. I say “loosely” because I made it up. Centipede combines the Latin roots for “hundred” and “foot”, referring to the many legs of this predatory arthropod.

When this centipede darted across the shower stall floor I took all one hundred steps as I leapt from corner to corner trying to avoid the incredibly swift, zigzagging beast.

Centipede is actually a misnomer considering they can have any number of legs ranging from 20 to 300 depending on the species. Centipedes are different from Millipedes. They both have many segmented bodies but centipedes have two legs per segment where Millipedes often have four per segment. 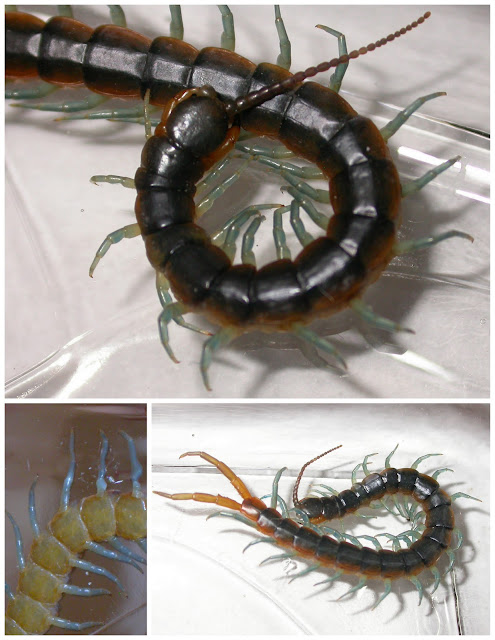 Centipedes have an odd number of segments including the first segment that has modified legs, known as forcipules, which they use to inject venom into prey. Depending on the size of the centipede they can sting and harm a human. This one is a Blue Centipede (Scolopendra viridis) and is about two inches long with small pinchers. Some centipedes can cause anaphylactic shock and since I had yet to I.D. it in the shower I did my best to step around it.

In a way, this species is my friend. They hunt roaches and spiders at night. I just prefer that the action is on the outside of my house. What comes around goes around and they in turn are preyed upon. I’ve seen Loggerhead Shrikes and Mockingbirds munch on centipedes. During the day the centipedes hide in moist areas like leaf litter, under the bark of a tree or in an exfoliating luffah.

There’s no shortage of critters that get into my house from my wooded neighborhood. I’ll continue to protect my fortress, all the while curious as to what’s going on just a few steps out side my door.
Written on a whim by Jungle Pete at 3:12 PM